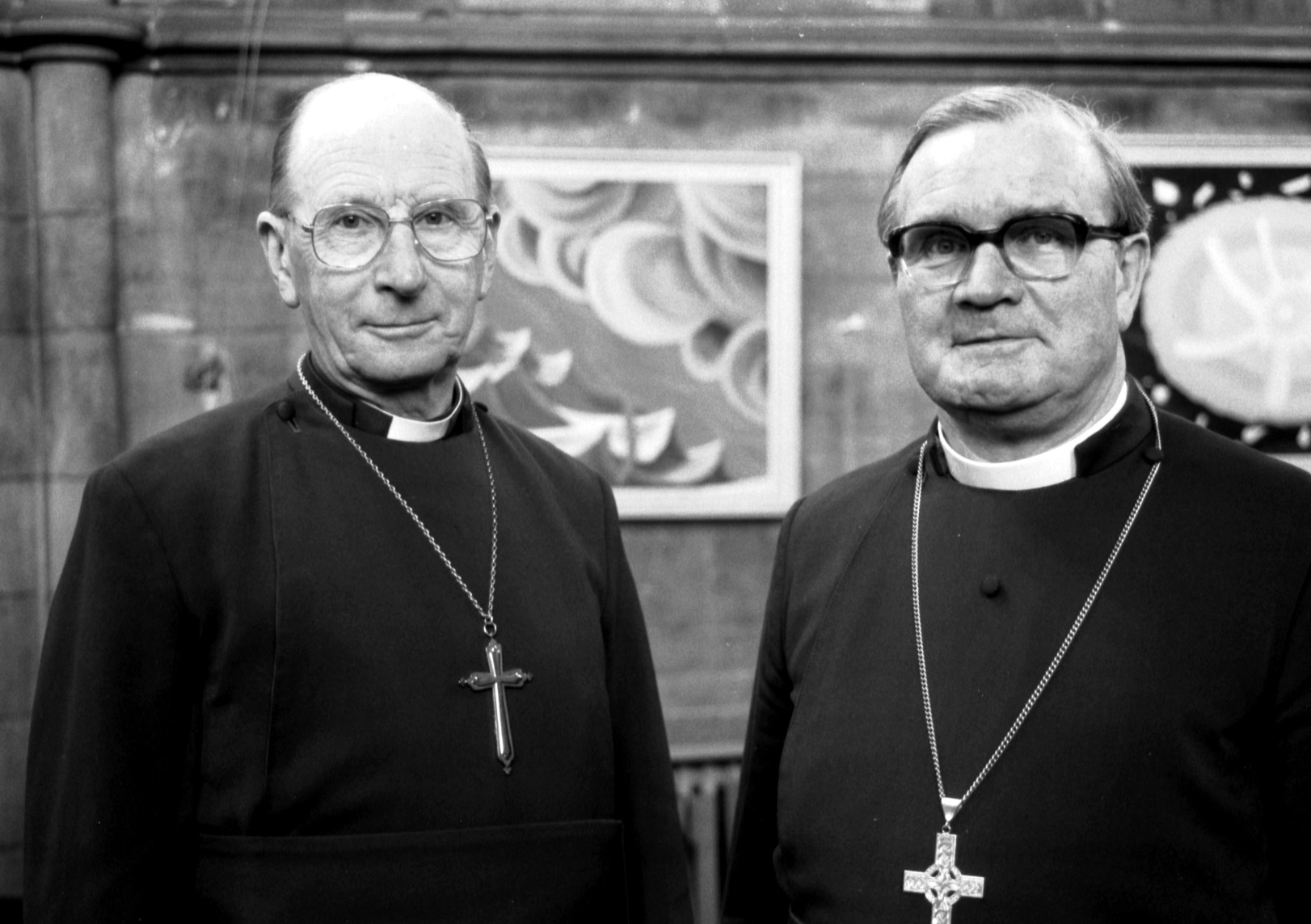 Ever wanted to take a sabbatical or go on study leave? Now is your chance!

The Bursary is awarded annually in memory of the Rt Revd Alastair Haggart, shown above (on the left, with the Rt Revd Edward Luscombe), who first studied at Edinburgh Theological College (Coates Hall) and Hatfield College, Durham, graduating BA in 1941. Ordained that same year, he served curacies at St Mary’s Cathedral, Glasgow and St Mary’s, Hendon, before becoming Precentor at St Ninian’s Cathedral, Perth, Rector of St Oswald’s, Kings Park, Glasgow and Priest in Charge of St Martin’s, Glasgow. For a decade from 1959 he served as Provost of St Paul’s Cathedral, Dundee, before returning to Coates Hall as Principal and Pantonian Professor. He was elected Bishop of Edinburgh in 1975 and Primus of the Scottish Episcopal Church in 1977. He retired from both posts in 1985.

The eponymous Award aims to help finance sabbaticals or other similar leave of absence on the part of serving ministers – both clergy and Lay Readers – at a stage in the person’s life when such an experience will significantly enhance his or her development. The outcomes of the project should also be of benefit to the wider Church. The annual Award can be won by a single applicant or divided between several. Due to the recent generous legacy received from the estate of the late Mrs Mary Haggart, awards totalling up to £2,500 will be made in 2023.  All types of study leave, retreats and sabbaticals are supported in this way; university fees are not paid by these means, but attendance at conferences associated with further study is.

Grants in recent years have funded a wide variety of pursuits from studies of ‘pilgrimage’ (Canon Cedric Blakey) and ‘interim ministry’ (Canon Lisa Eunson), to a sabbatical in the Tantur Institute of Ecumenical Research (Canon Nicholas Taylor). Another beneficiary produced a meditative Lent Study Guide based on a daily artwork, (Canon Ruth Innes), the fruit of time spent in art galleries in Washington and New York. Canon Ian Ferguson enjoyed study leave in Mthatha, Eastern Cape in 2013, and Canon Dan Gafvert made a Retreat in Spain that same year.

The Very Revd Kelvin Holdsworth, Provost of St Mary’s Cathedral Glasgow, (above) has very recently returned from three months of study leave in the States, this being the 2020 Award deferred till late 2022. He writes:

The Alastair Haggart Bursary allowed me to have an incredible sabbatical at the end of 2022. It helped to pay for time spent in New York at General Theological Seminary and time living near Washington DC at Virginia Theological Seminary. As well as a time for study and reflection, I’ve no doubt that some of the people that I met on that trip will be friends for life. The Scottish Episcopal Church is deeply connected with the church in the USA and all the churches of the Anglican Communion. This sabbatical showed me how real those connections are and to build new ones for the future.

The Alastair Haggart Bursary Award Committee has decided to extend the deadline for applications for the 2023 Award till Palm Sunday. Application forms can be obtained on the Resources page here and returned to Linda Harrison, the SEI Administrator, by 2 April 2023.