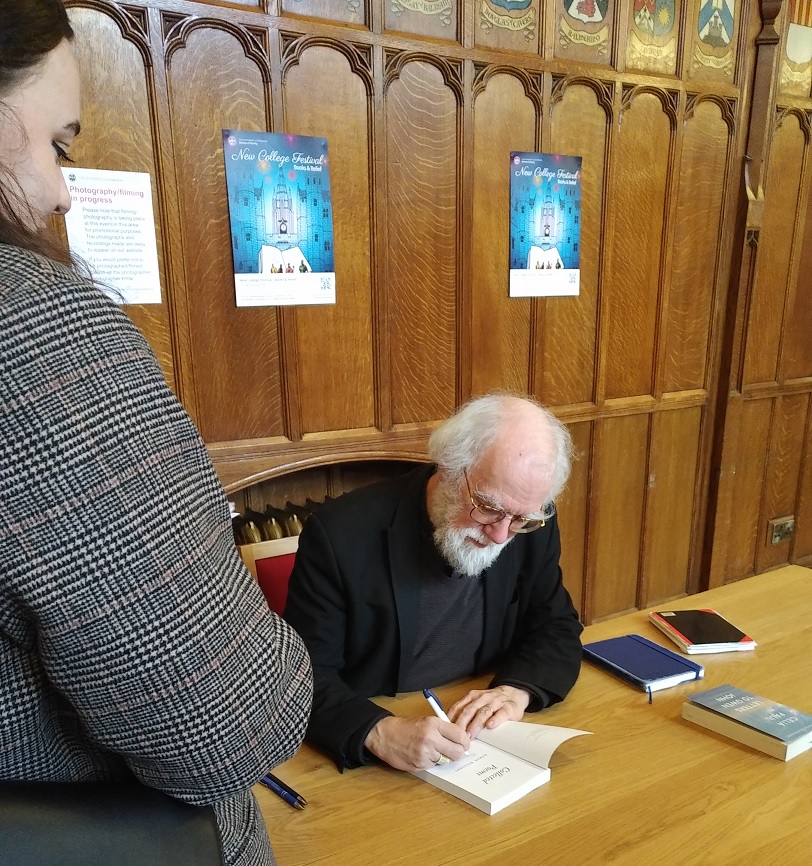 You can tell much about a person from the way they conduct book signings. Some authors dash off an illegible signature and fail to interact with the person in front of them, being intent instead on selling as much merchandise as possible. Not so the Rt Revd and Rt Hon The Lord Rowan Williams of Oystermouth FBA after his Templeton Lecture in the Assembly Hall, Edinburgh on Saturday. Devoid of any flamboyance, he engaged courteously and at length with each person in the lengthy queue snaking round the Rainy Hall, taking care to check the spelling of the addressee’s name and inscribing a personal dedication in beautifully-shaped lettering.

The former Archbishop of Canterbury was in Edinburgh to deliver a lecture entitled ‘Seeing the Light: Epiphany in Visual Art’, an event sponsored by the Templeton Religion Trust through its ‘Art and the Sacred’ project based at the School of Divinity. The lecture, part of New College’s annual three-day Festival of Books and Belief, was introduced by the Revd Professor Alison Jack, Principal of New College and Director of the Scottish Network for Religion and Literature.

SEI staff and students, current and former, were part of the large audience gathered to hear him, despite the dreich weather and the competing attractions further west. Second year ordinand Eilidh Proudfoot (Diocese of Edinburgh) captures the essence of the event in this succinct account:

Lord Williams asked us to consider what makes artists return to the same subjects, sometimes obsessively, time and time again? He took us on an hour long whistle-stop tour of art and anthropology before suggesting that this question finds its answer in theology. Pursuing the representation of even the ordinary and mundane can be an opening to grace if we take the time to allow this epiphany to grow in us. An inspiring morning with much to ponder!

‘If we take time’ … that was the essence of his thesis. Humanity, he maintained, has for ever had the urge to represent that which is before us, to enter into a dialogue with it and be shaped by that which enters us; to be absorbed in and by the Other – in artistic endeavour as in the liturgy of the sacrament. Humanity has also always had a need to represent that which is unbearable because in so doing, we open it up to an agency other than our own, to ’the God who makes and mends’; in so risking, we declare that atrocities do not have the last word.  For ‘the ordinary has in its depths recreative energy beyond our imagining’.

But for this we need to discard the sovereign gaze, the urge to capture and control, to configure reality as object to our subject – and instead wait contemplatively before the other, for ‘the little surprises’, the epiphanies in the ordinary.

Even when signing books.