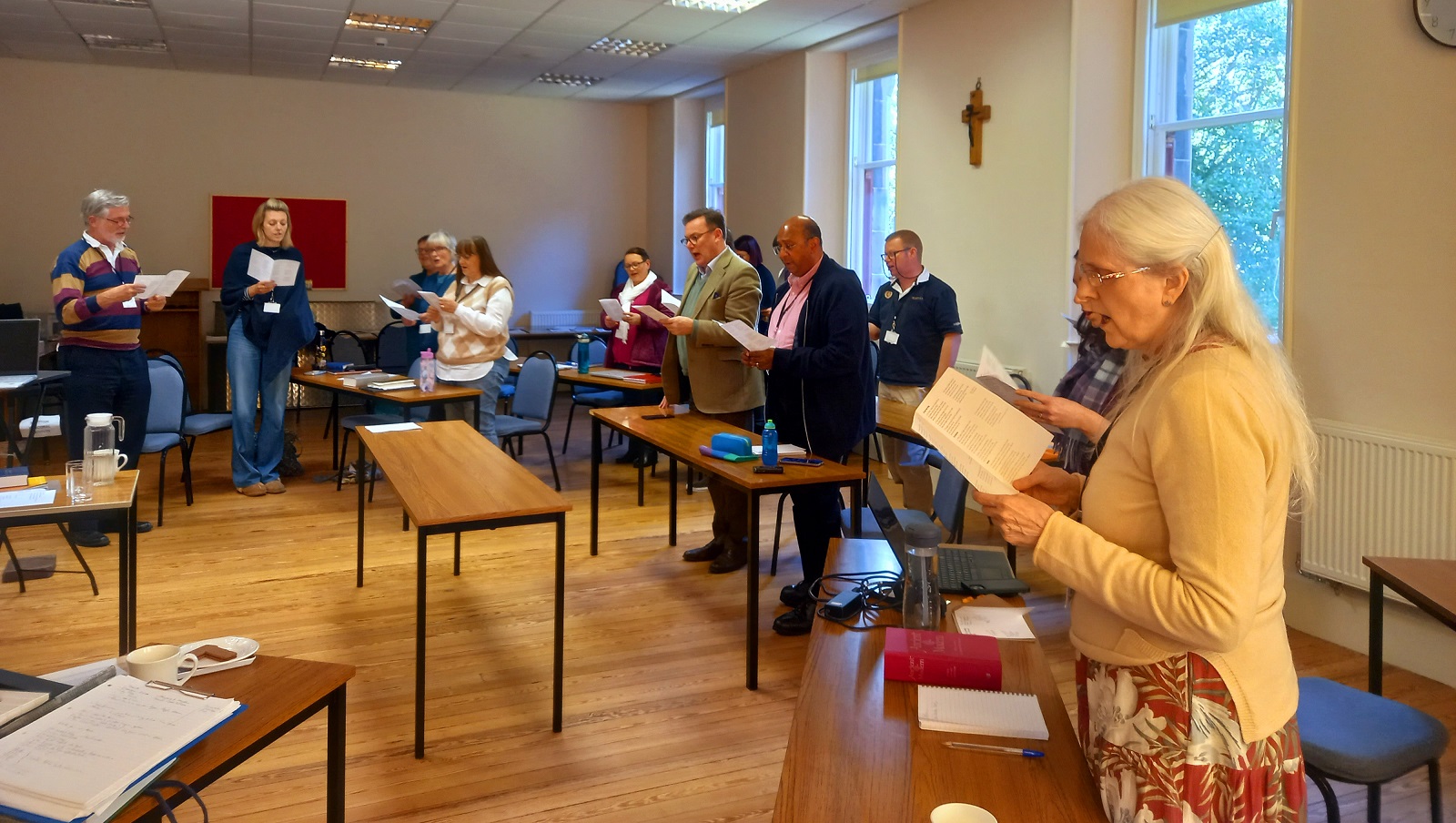 The first Residential Weekend of the academic year saw students and staff engaged in much music-making. On the Saturday afternoon the Revd Canon Christoph Wutscher, Rector of Holy Trinity Stirling and Provincial Representative on the Royal School of Church Music Scotland Area Team, came to Kinnoull to lead the first session in our year-long series on ‘Liturgy and Music.’ He was accompanied by Ian Munro, RSCM’s Regional Manager for Scotland and Musical Director of the Kilmarnock and District Choral Union, the Pentland Singers and Traquair Choir. Together they helped us to think critically about the use of hymnody in worship, tackling such topics as metre, theology, congregational capacity and seasonal variation. The sessions also had a practical side; not only did we practise several unfamiliar hymns and sample a wide range of hymnbooks, but we also tried our hand at writing hymns ourselves –  a taxing and absorbing task which hugely increased our appreciation of the hymnodist’s craft.

In the evening the Worship Group rostered to lead that weekend – ‘Cruinneachadh’ (Gaelic for ‘Gathering’) led by Tony Clapham (Diocese of Glasgow and Galloway) – offered a service of Solemn Evensong. The Revd Dr Michael Hull as the officiant, attired in cope and attended by acolytes, sang the Office within the magnificent sanctuary of the Church of Our Lady of Perpetual Succour, censing the altar during the Magnificat. Prior to this, first year Mixed Mode ordinand Jamie Campbell (Diocese of Brechin, above) put the community through its paces, skilfully teaching us how to sing Psalm 8, a double Anglican chant, as well as other parts of the service. Coached by him and accompanied on the evening by his magnificent organ-playing, the community did indeed make a joyful noise.

SEI is an affiliated member of RSCM and is intent on deepening its links with that organisation as best it may, believing that learning about sacred music is a vital aspect of formation; an article outlining SEI’s endeavours in this field will feature in the December issue of the Church Music Quarterly.

Later this term the Revd Dean Norby and members of the Worship Team from All Souls Fife will continue our Saturday afternoon ‘Liturgy and Music’ series, to be followed in January by a visit from the Provost of St Mary’s Cathedral Glasgow, the Very Revd Kelvin Holdsworth, and the Director of Music therein, Frikki Walker; Emily Walker of the Wild Goose Resource Group will complete the series in March.