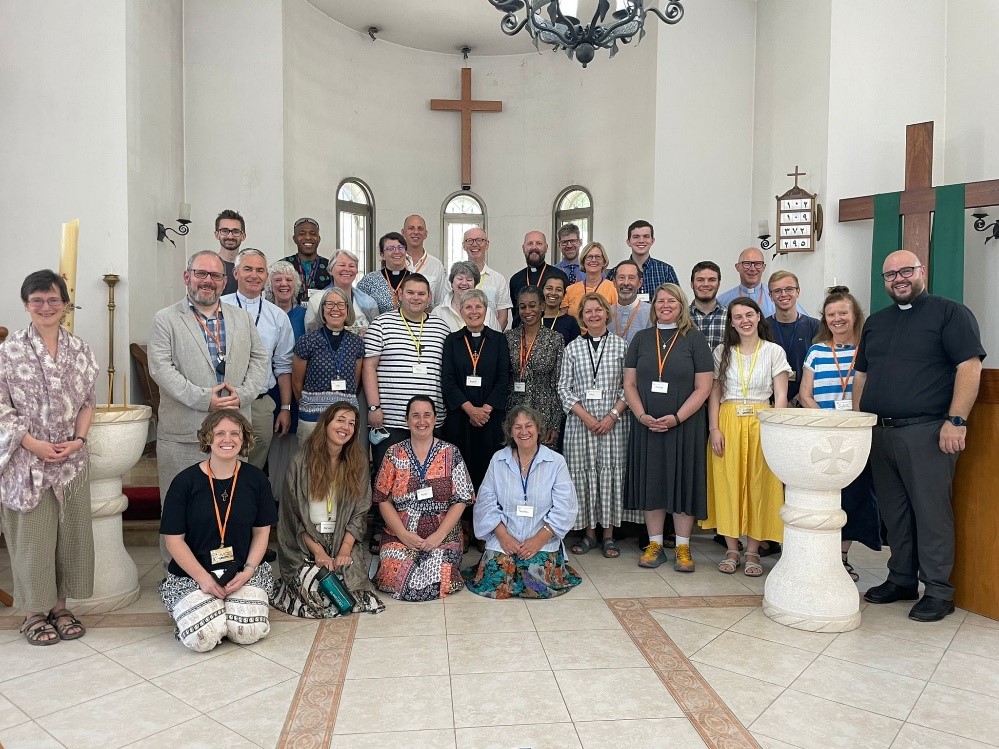 Second-year Mixed Mode ordinand Ross Stirling-Young (Diocese of St Andrews, Dunkeld and Dunblane) writes: Having received news back in February this year that I was awarded a scholarship to attend St. George’s College in Jerusalem, I didn’t quite believe it would take place. Between Covid, flight cancellations, and travel industry strikes, I remained optimistic but didn’t hold out too much hope just in case the inevitable cancellation happened. However, I’m pleased to report that I returned only yesterday, and felt compelled to write this short article sharing with others the many different experiences that I have been fortunate enough to gain during the twelve-day study pilgrimage.

I joined 31 other ordinands or recently ordained deacons from across the Anglican Communion, including England, Wales, and America. Each day began and ended with a daily Eucharist and evening prayer in St. George’s Cathedral or another iconic depending on the schedule. One of the highlights for me was leading our group in prayer at the Church in Magdala (shown below) dedicated to St. Mary Magdalene on the shores of the sea of Galilee. We then drove to Mount Tabor where I worked alongside Rev Dr Mich Lajeunesse in leading the group and staff in a reflection based on The Transfiguration of Christ.

One of the other highlights of the course was when we visited Aida Palestinian Refugee Camp in the West Bank in Bethlehem, receiving such warm hospitality and friendship at the same time as hearing first-hand the extreme difficulties of people living in an occupied land. In addition, we met people from Musalaha, a non-profit organization that works towards reconciliation between Israelis and Palestinians based on the Biblical principles of peace, justice, and love. One of the eye-opening experiences was when we visited Jericho and Nablus in the West Bank, passing large red signs stating that we were now entering Zone A locations, illegal for Israelis to pass and stated in large writing “dangerous to your lives”. By physically visiting these locations and hearing from both our tutors and locals, the conflict became clearer to understand and enabled my prayer to deepen in the hope of bringing peace to these lands.

Other places we spent time visiting, worshipping and meeting local people included: The Church of the Annunciation in Nazareth, The Church of the Nativity in Bethlehem, The Good Shepherd Episcopal Church in Rafedia, re-affirmation of Baptismal vows in the Jordan River, first-century market streets and Joseph’s tomb in Nazareth, The Holy Sepulchre, Jacob’s Well, a boat ride on the Sea of Galilee, Tabgha (five loaves and two fishes), Mount of the Beatitudes, Capernaum, Bethsaida (healing of the blind man), Gergesa (healing of the possessed man), Yad Vashem Holocaust Museum and Lifta – an abandoned Palestinian Arab village in Jerusalem.

To end, one experience that is worth mentioning was the ability to gain access into the Al-Aqsa Mosque and the Dome of the Rock on Temple Mount. These Islamic holy sites are closed to all non-Muslims, although the external complex can be viewed by visitors. It was really great to speak with one of the officials of Al-Aqsa and share with him the importance of ecumenical relations within the SEC to which he replied, “I pray that same can happen one day here also”.

My small cell group included people from both England and the States, and it was a joy to journey with each of them in both prayer and learning. I’m truly thankful to all the pilgrims to the SEI, The St. James Fund, and the Central Fife Centre of Mission for making this pilgrimage happen. Lastly, thanks to Rev Canon Dr Anne Tomlinson for my letter of commendation and to St. George’s College for awarding me the scholarship to attend.

I now look forward to sharing my experience with current and future SEI students, to encourage further applications and visiting local Churches to offer illustrated presentations regarding the work of St. George’s College.