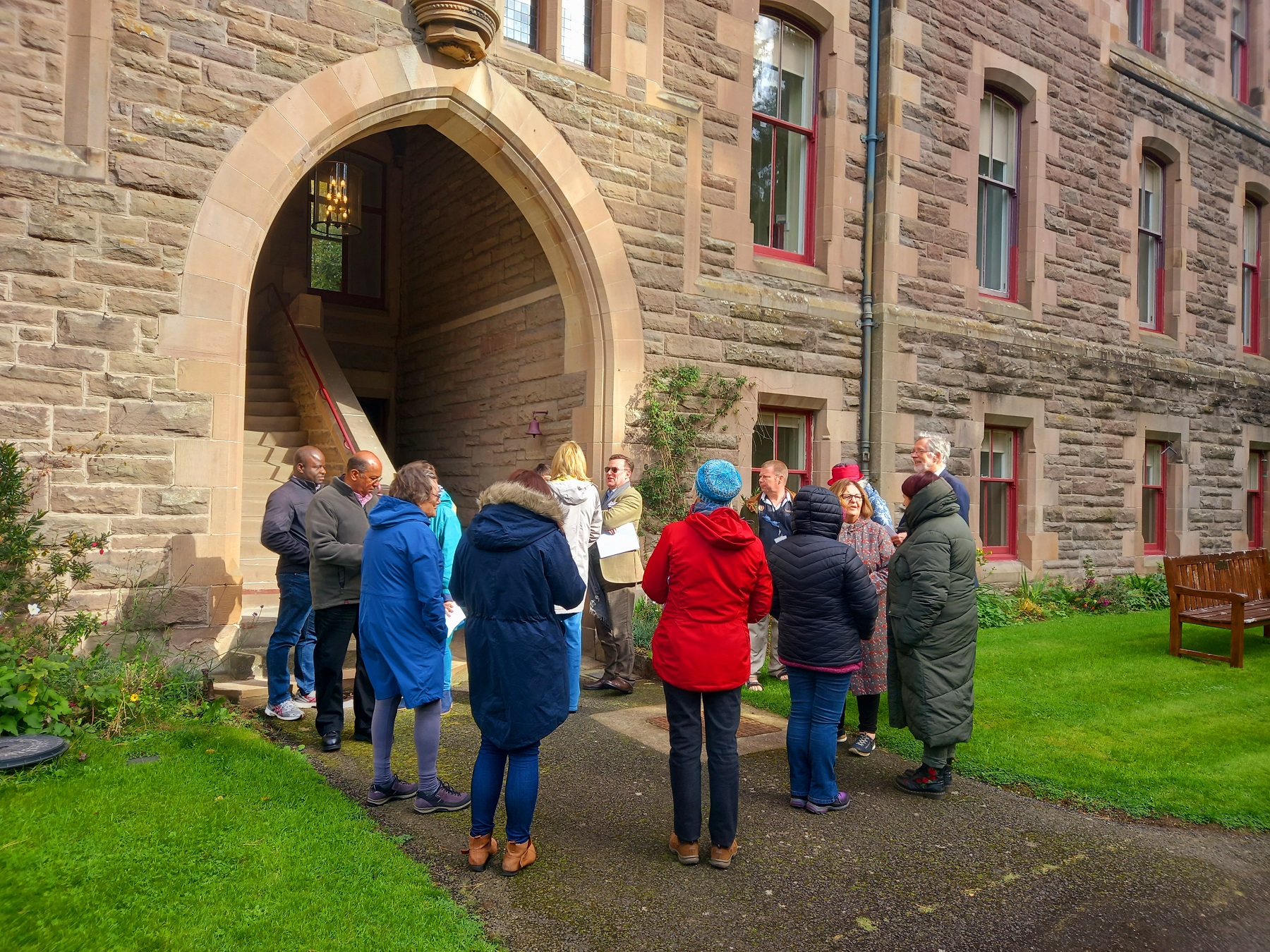 This colourful photo shows the SEI community gathering at the start of an outdoor service at St Mary’s, Kinnoull during the recent Residential Weekend there. For the previous four weeks, students and staff had been using the wonderful liturgical resources produced by the SEC’s Liturgy Committee for the Season of Creation to shape their praying. This service marked the culmination of that period. Thankfully, despite torrential rain the previous day, the clouds parted just before midday on the Saturday, allowing us to venture out (albeit warmly wrapped up!)

The Small Group rostered for worship leadership that weekend, ‘Cruinneachadh’, led by Glasgow and Galloway final year ordinand Tony Clapham, guided us skillfully around seven stations in the grounds. The planning of the route had been very thoughtfully done so that not only was the path navigable by all, but the prayers said at each station resonated with features in the grounds. Thus in the Calvary grotto we focussed upon committing to God’s care the burdens and cares each was carrying, while beside the still waters of this beautiful pond we prayed Psalm 23 in silence. And throughout the pilgrimage, all were invited to be mindful of the setting in which they were praying, and to give thanks to the ‘God whose glory fills the whole creation, and whose presence we find wherever we go.’

But being mindful of creation – its beauties, our lamentable lack of care for those God-given resources, and our responsibilities as ‘co-creatures with the earth itself’ – is not something to be focussed upon for a mere four weeks in the year, but is a perpetual focus of prayer and action. It also forms the thrust of the year-long research project SEI staff and students have now embarked upon; an investigation into the adoption of a transversal approach to the consideration of creation care across the formational lives of SEI and The Scottish College (Congregational and United Reformed) in partnership with Eco-Congregation Scotland.

All three organisations believe that if students are to emerge from their formation as ministers committed to leading the people of God in their discipleship and participation in the biblical mandate of creation care, then they themselves need to be formed as co-creative care-givers; they need to undergo what Laudato Si’ calls ‘a profound interior conversion’. Our joint qualitative research project thus seeks to establish how effectively the measures already instituted within the curricula and lifestyles of these two theological institutions have caused such a change of heart and mind; and, in conversation with EcoCongregation Scotland, to analyse what further developments require to be embedded in the lives of each institution in order to achieve better integration in future.

Baseline surveys of attitudes in the two theological institutions have already been carried out, and the four-strong research team is currently getting to grips with the SenseMaker tool which will be used in the second phase of the work. SenseMaker is a narrative-based research tool that enables the capture and analysis of a large quantity of stories in order to understand complex change. It provides a meta-analysis of qualitative data that bridges a gap between case studies and large-sample survey data. Drawing upon anthropology, complexity theory and neuroscience, the methodology involves collecting large numbers of short stories that together create a nuanced picture of a given topic.

So that is what we will do next, in the spring term: gather multiple stories by means of on-line journalling. We will keep you informed!