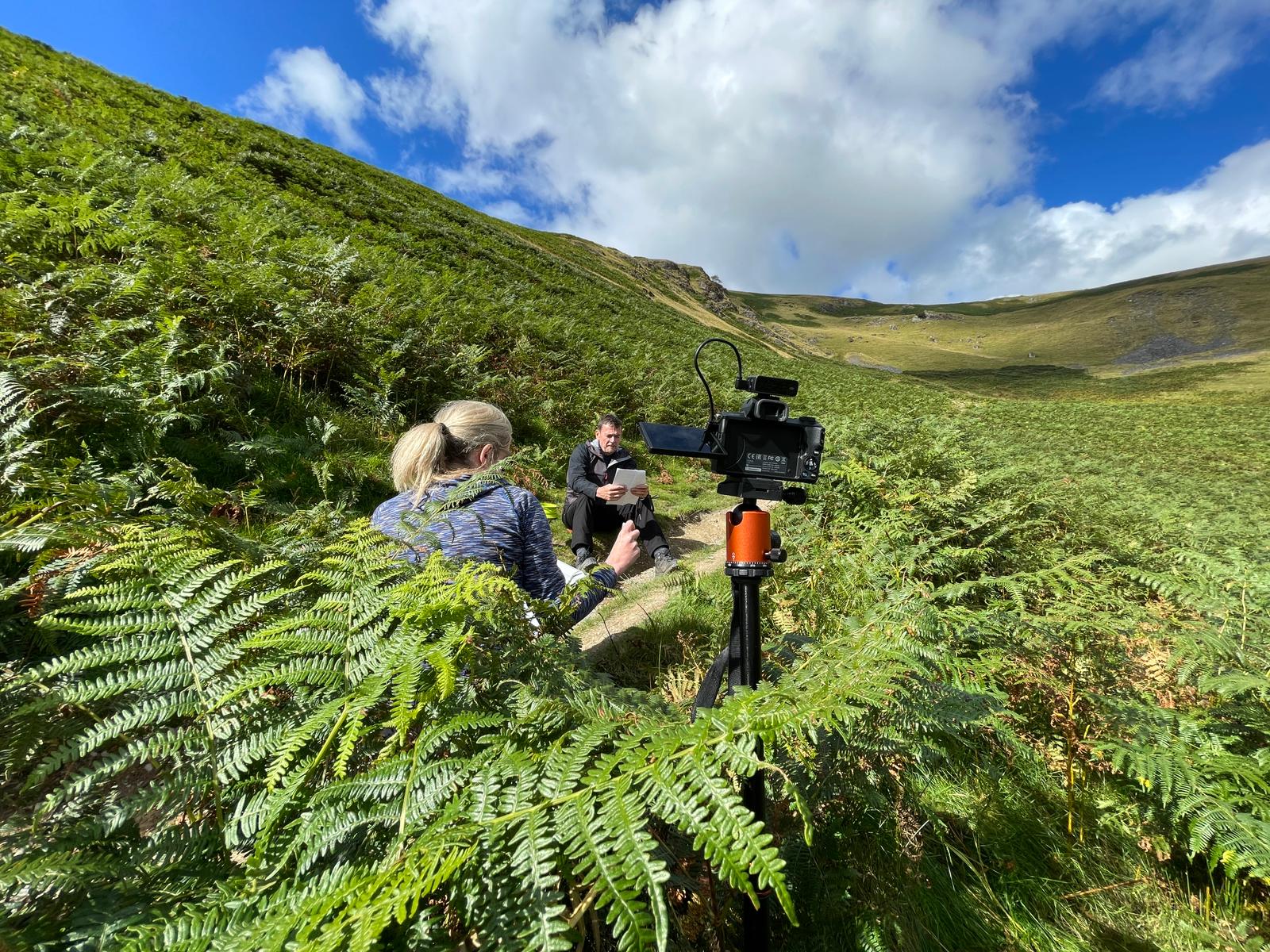 The delivery of Dr Tiplady’s lecture from the hillsides of the Lake District gave a sense of immersion and context which both enhanced and grounded the subject matter: A Christian Spirituality of the Mountains.  If the medium is indeed the message, the professionalism of the film and production team  brought to life the wild beauty and majestic ‘otherness’ of the landscape, particularly where the camera panned out and Richard became a quickly receding figure in an ever-growing horizon.

As Dr Tiplady pointed out, there are numerous books on the spirituality of the great outdoors, but very little on a Christian dimension.  In the Q and A afterwards he mentioned a Mountain Festival he had attended in Fort William where, quite unsolicited, audience members began discussing their own spiritual experiences in the hills.  With the influence of Nepal and trekking in the Himalayas, the dominant religious influence in much writing on mountain spirituality tends to be Buddhist in origin. Referring during the Q and A to the numerous (rather great!) quotes he gave in his presentation, Richard pointed out that none of them had been from ‘Christian’ books, and yet all had been insights he had been more than happy to affirm.

Richard’s presentation was structured around the four ‘great separations’ recognised by the Christian faith: from God, one another, the environment and ourselves.  The Guild of Health and St Raphael, organisers of the annual Denis Duncan Lecture, have a whole-person approach to healing, well-being and human flourishing, which Richard reflected by exploring reconciliation with ourselves, with God, with one another and finally with the environment.

The talk was accessible even to people not particularly interested in or experienced in the great outdoors. But as someone who enjoys hill-walking, I resonated with what was said and read my own experiences, including my mistakes, into the examples and insights Richard gave.  He put words to gut feelings, instincts and almost sub-conscious or subliminal senses which has left me inspired to read more in this field and also to get out onto the hills again.

Richard spoke first about the modern disconnection with ourselves which is overcome by the challenge that the mountains provide, calling forth qualities of resilience, risk taking, courage, patience, attention and focus.  Experiences of tiredness, cold and the seemingly never-ending trudge ‘bring us home to our bodies’ in a way few other things do.  Mountain mindfulness and the need to be ruthlessly honest about our capabilities can sometimes be a matter of life and death; there is nothing like being on an exposed piece of rock at a high altitude to focus your senses.  Research has shown that people with Parkinsons, Cerebral Palsy, M.S and eating disorders have all been helped by outdoor experiences.  For an incarnational faith such as Christianity, the bodily nature of life is to be embraced and the mountains give us a no-frills and often messy but very real way of doing this.  There is not much of a place for Platonism whens your chest is heaving and your legs aching going up a never-ending slope in the rain!

Secondly he spoke about how we are reconciled to God as we are pushed beyond our limits.  In the great otherness of the mountains we are shifted out of our egos and forced into encounter.  God becomes possible in the mountains and wilderness in a way He might not be in a city suburb.  Like figures in the Old Testament, God is met in the emptiness and barrenness, and in His indifference to our petty squabbles and pursuit of achievement.  We are told by scripture to look at creation and see God’s hand there in His generosity, grandeur and sheer exuberance.  Creation acts as a foretaste of what is to come, and the closer we get to it the more we find ourselves in an encounter.  We become conscious of something bigger than ourselves, a great Other, beautiful and sobering in equal measure – that which Richard quite rightly called ‘The Sublime’. The Christian claim that the Creator is also our Saviour and Reconciler gives a uniquely Christo-centric dimension to reconnecting with the Divine.

We are also drawn into a closer connection with one another.  Shared misery, summiting, support and endeavour can create tensions and challenges in friendships, but also a bonding through sharing a narrative that is uniquely ours.  Richard talked about the ‘Gift Economy’ of the mountains where the competitive world is largely left behind and replaced by a culture of the gift and mutual encouragement.  He suggested that there is a lot of opportunity for the church to connect with this, including the opening of halls or grounds for overnight stays when near walking routes and pilgrimages.

Finally Richard addressed our reconciliation with the environment.  He reminded us that so many mountaineers and outdoor enthusiasts become ardent environmentalists, starting with John Muir. I can certainly testify that it is difficult to be up close and personal with the mountains and not feel moved to want to care for such beauty and grandeur.  Richard touched on the challenges of keeping a balance between those who want to use the outdoors for recreational activities and those who make a living from it.  The importance of travelling light and leaving nothing behind to minimise our footprint taps into Christian spiritual disciplines of solitude, silence and simplicity.

The Lecture, which was followed by a vibrant and wide ranging Q and A session, put the Guild of Health and St Raphael onto the radar of a wider audience, and was excellently facilitated throughout.  Richard was mindful of the privilege of resources, time and physical health which make his hillwalking possible. However, intentionality is key, and the discipline and commitment of getting yourself out the door and making time will be well rewarded at whatever level of skill or fitness we have ..… for as he ended his talk, ‘The Hills are calling and I must go.’  And that’s my cue to finish this review, get my boots on and put the dog in the car.

The Lecture can be accessed here