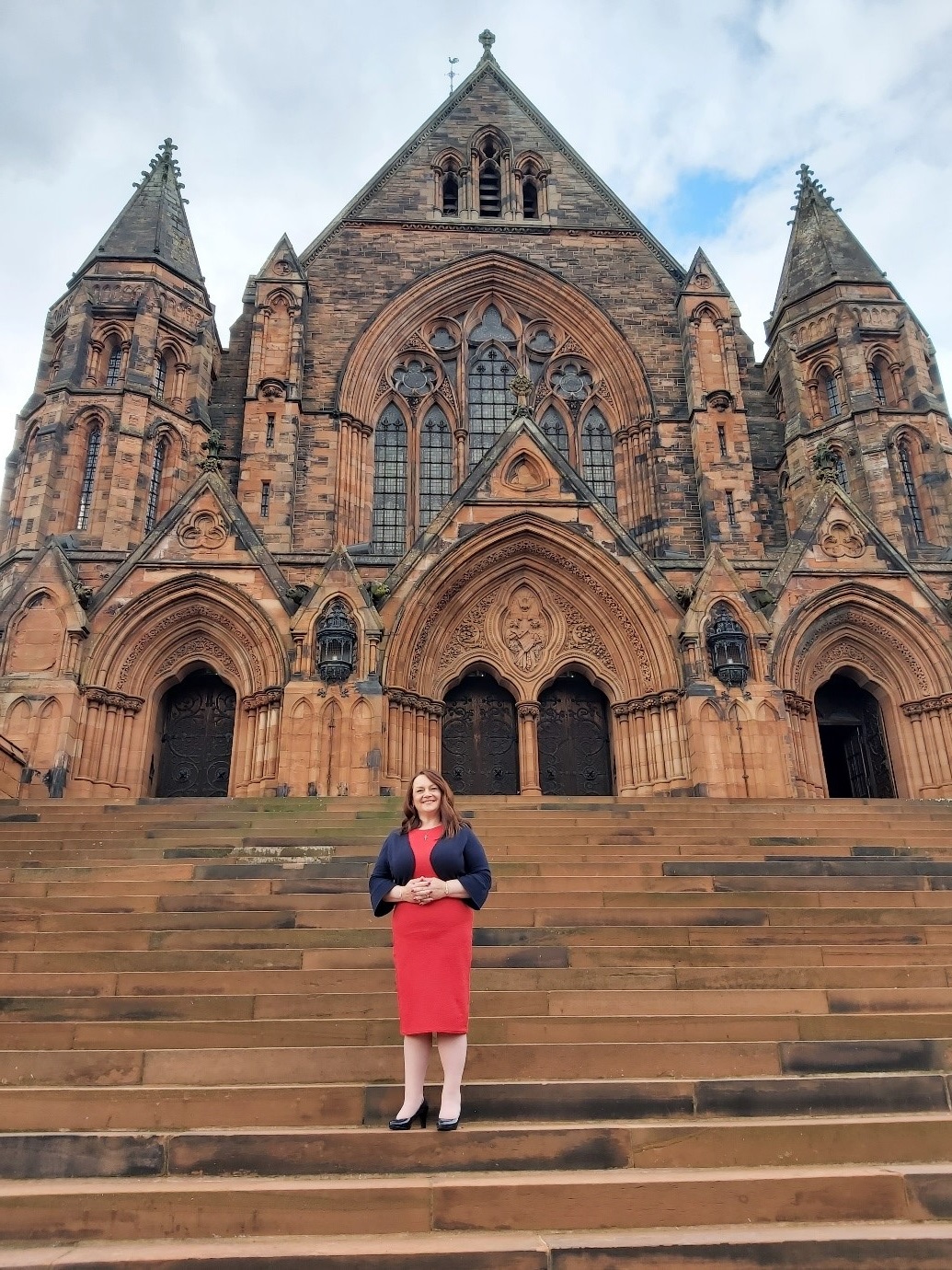 Maureen Farquhar, shown above outside the Coats Building, Paisley, is a second year ordinand from the Diocese of Moray, Ross and Caithness. She was born in Glasgow to Island parents and brought up in Aird, Point, on the Isle of Lewis, where the family’s primary language was Gaelic.

A few years ago, along with other lay members of the SEC and several clergy, she studied a Gaelic Liturgy course at Sabhal Mòr Ostaig, the National Centre for Gaelic Language and Culture. Based in Sleat, Isle of Skye, it is the only centre of Higher and Further Education in the world that provides its learning programmes entirely through the medium of Gaelic in an immersed, language-rich environment.

Last month she received an email from Alistair MacKay, the lecturer who had taught the Gaelic Liturgy course in conjunction with B`ord na G`aidhlig. Alistair invited her to participate in two forthcoming editions of Alleluia!, a spiritual series broadcast on BBC Alba, as a member of the Scottish Episcopal Church.

SEI was delighted to give permission for this endeavour, seeing it very much as part of Maureen’s formation and training for ministry in Scotland. The Revd Canon Dr Iain MacRitchie, Priest-in-Charge of St Michael’s Inverness, along with Alistair and Angela Mackay, helped her prepare, kindly making a recording of the readings and pulling those and the reflections together.

Maureen writes: I had the privilege of representing the Scottish Episcopal Church, SEI and the Gaelic community on 25 August at the Thomas Coats Memorial Baptist Church, Paisley, where the BBC recorded two pieces for the next Alleluia! series. The recorded readings and reflections were Mark 10:13-16, which will be shown soon, and John 1:1-14, which will be for the Christmas show.

I have had such an amazing experience. Father Seamus reminded me why I was there, saying, ‘you are here because you have been called.’ I truly believe I was not alone throughout this experience, and thank the staff for making this a positive experience. I feel very honoured and privileged to have been asked to participate in this show.

Maureen has very kindly donated the fee received for taking part in the recording to SEI’s ‘St James Fund’, a pool of money used to enable students to enlarge their formational experience by going on retreats, attending conferences and accessing external training in specific fields such as Godly Play. We thank her for her immense generosity and thoughtfulness and look forward to watching the two programmes.